Osteopathy is an independent, holistic, and scientific form of medicine in which diagnosis and treatment are carried out with the hands. Osteopathy focuses on the root of complaints and treats people in their entirety.

The goal of osteopathy is to restore mobility to every system in case of functional disorders and restrictions in the human organism.
Restoration of motion in each system enables normal interrelationship between the following systems:

This area includes bones, muscles, fascia, and joints and is the basis for treatment. The musculoskeletal system is checked for pain, discomfort, and restrictions.

All of our organs can have less mobility due to adhesions, which can affect the stability of the surrounding muscles and connective tissue. For this reason, the organs are palpated and gently treated in this treatment phase. This supports and stimulates their function, promotes self-healing powers, and dissolves pathological mechanisms.

The craniosacral system comprises the cranial bones, the cerebral and spinal fluid and the brain itself, the meninges and spinal cord membranes, and the sacrum. All structures of the head are connected to the nervous system, the hormonal system, the musculoskeletal and vascular and organ systems. The body's processes can be positively influenced by their treatment. Tissue tension is reduced and blockages are released.

If there are normal anatomical and physiological relationships between these systems, then health exists.
The osteopath accomplishes this primary goal by treating the cause of the dysfunction rather than the symptom. 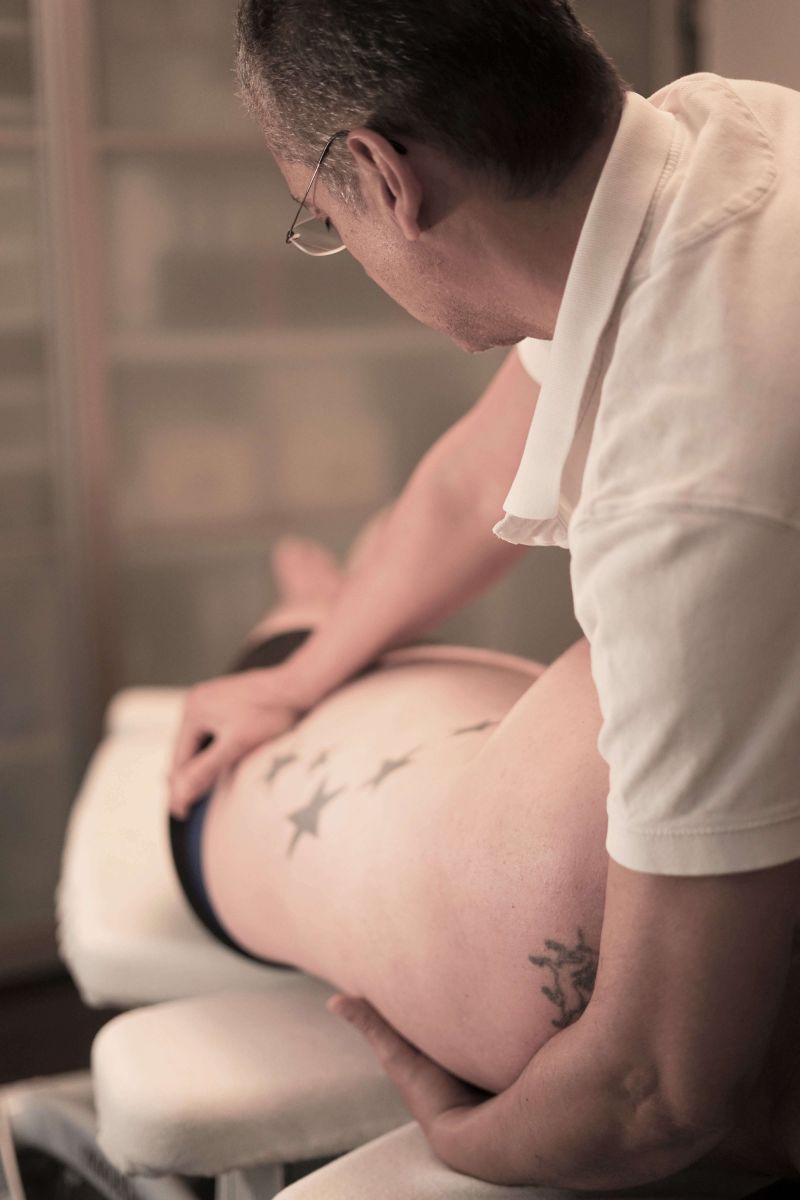 For full screen mode, use the icon at the bottom right

For full screen mode, use the icon at the bottom right

How does an Osteopathic Treatment Proceed?

The osteopathic approach to the human body is very holistic. It affects all tissues in the body from head to toe and checks that the tissue is in the right place, that it is moving properly, and that there is a good blood supply.

I look at the biomechanics, which are the movements of the body's joints. I look at the movement of the fasciae as you breathe, and as your blood moves properly through the tissues. I also look at things like the sutures of the skull bones and examine the movements, location, and position of each of the organs within your body and compare this with the actual symptoms with which you came to me.

So the assessment begins with a medical history, which in some cases can take up to 30-40 minutes and can be very thorough. I would like to know about injuries, compressions, small torn ligaments, possible major trauma, surgery, scars, and medication you are taking as it could change the treatment I offer.

After I've finished the medical history and have a good idea of ​​what your body has been through, I want to know how your problem presents in reality. So I go from prehistory to a current assessment and observation.

I look at you to see how gravity falls in your body if the standing is over on one or the other side and see which forces your body can absorb. I check your ability to move physically by doing simple tests like leaning forward and sideways, dropping one knee, inhaling and exhaling, and turning your head left and right. Tests like this will help me get information about mechanical function from you. Once I'm done with the observation and the simple mechanical tests, I'll do tests on different parts of the body that are more specific, e.g. checking a facet joint in the spine so I can see if the bone in the spine is moving properly or not.

I also will assess the movement of the organs. There are passive and active movements that occur during the assessment. This means that I put my hand on an organ and listen inside without moving my hand or just listen to see if I can feel any passive movement. Passive means without my added muscle strength. But I will also actively take this organ and gently physically move it left and right, up, down and rotate it, to see if it can move along the axis. This applies not only to the organs but also to each of the joints, to the muscles and tendons.

After these active tests are done, I’ll let you lay on your back and I will check your skull to see if it is showing normal vitality or a so-called PRM (Primary Respiratory Mechanism) and if the skull bones are moving normally. This is how I find out if the liquid in your head is moving properly. I can carry out this type of assessment in different parts of the body: For example, in the sacrum, which is located in the lower back, as well as in the hipbone, and possibly even in the footbone to see whether this fluid moves up and down in you. Then I take all of that and add it up.

So, it takes a while to make these assessments. Even so, I promise to work on you in the first session.

So I take the story, the observation I saw, the active tests, the muscle tests, the organ tests, and the head, pelvic, and feet tests from a vitality point of view, add it all up, and develop a treatment plan.

According to the treatment plan, I will then treat you step by step and help your body to find its way back into normality.

What do you wear during a session?

Women can be treated while wearing bras and panties, men with underpants.

What is osteopathy good for?

Conditions and illnesses in which osteopathy can be used for are for instance, headache, strains, lower back pain, poor posture, spinal curvature, menstrual cramps and digestive problems. This list is not exhaustive.

The osteopathic examination begins with a detailed diagnostic interview. I will then examine your posture, muscles and mobility while standing, sitting and lying down. Useing different manual techniques, I detect movement restrictions, can relieve pain and activate the self-healing powers. The treatment itself is usually completely painless.

What do I have to consider after an osteopathic treatment?

The osteopathic treatment is in itself not associated with any restrictions, but the body needs time to regenerate.

A short-term intensification of symptoms is a common, normal reaction to osteopathic treatment. You should therefore avoid any sporting activities on the day of treatment and for up to two days afterwards.

In the first session, I will be happy to advise you on the optimal osteopathic treatment for you and to create your treatment plan together with you. 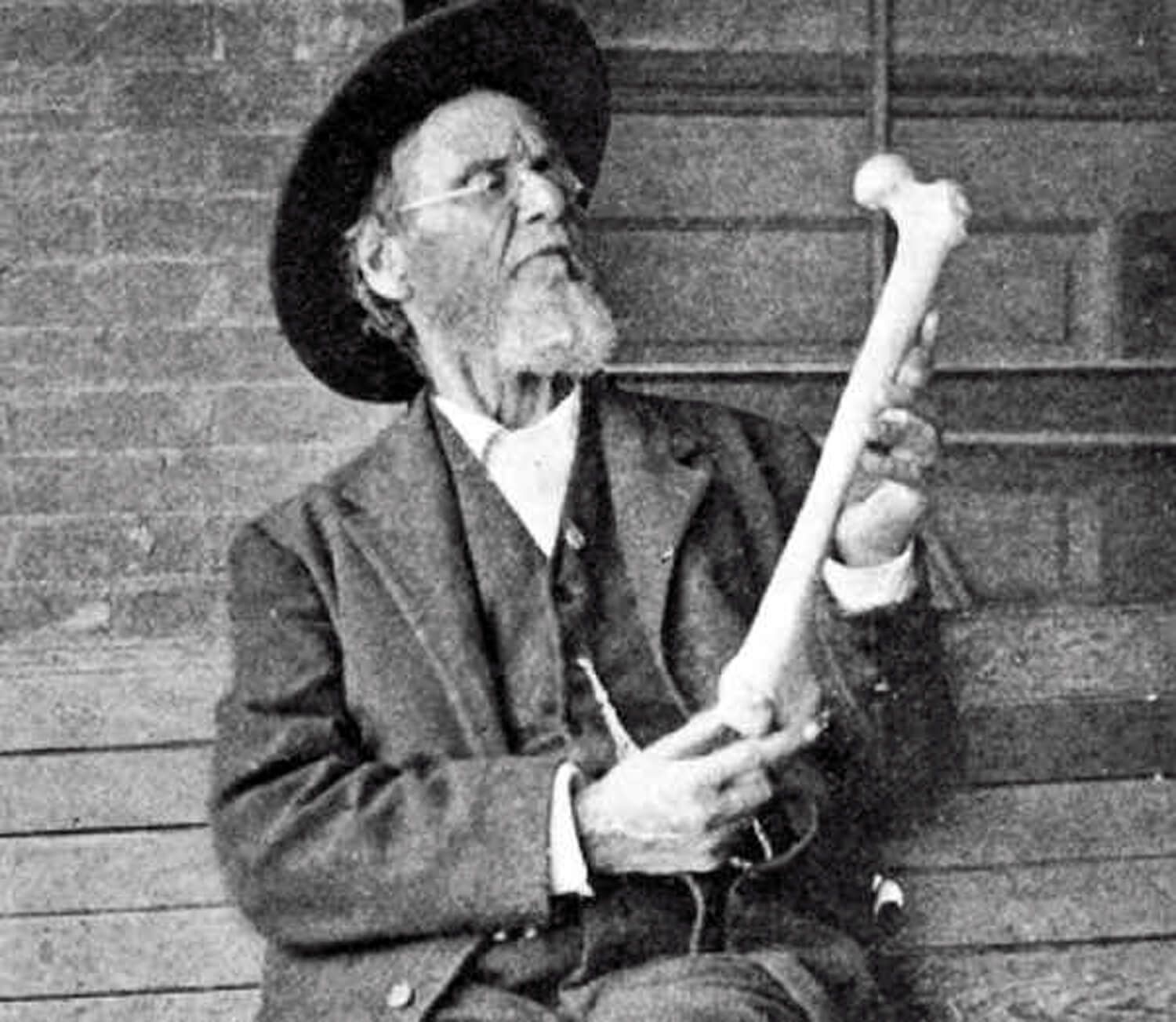 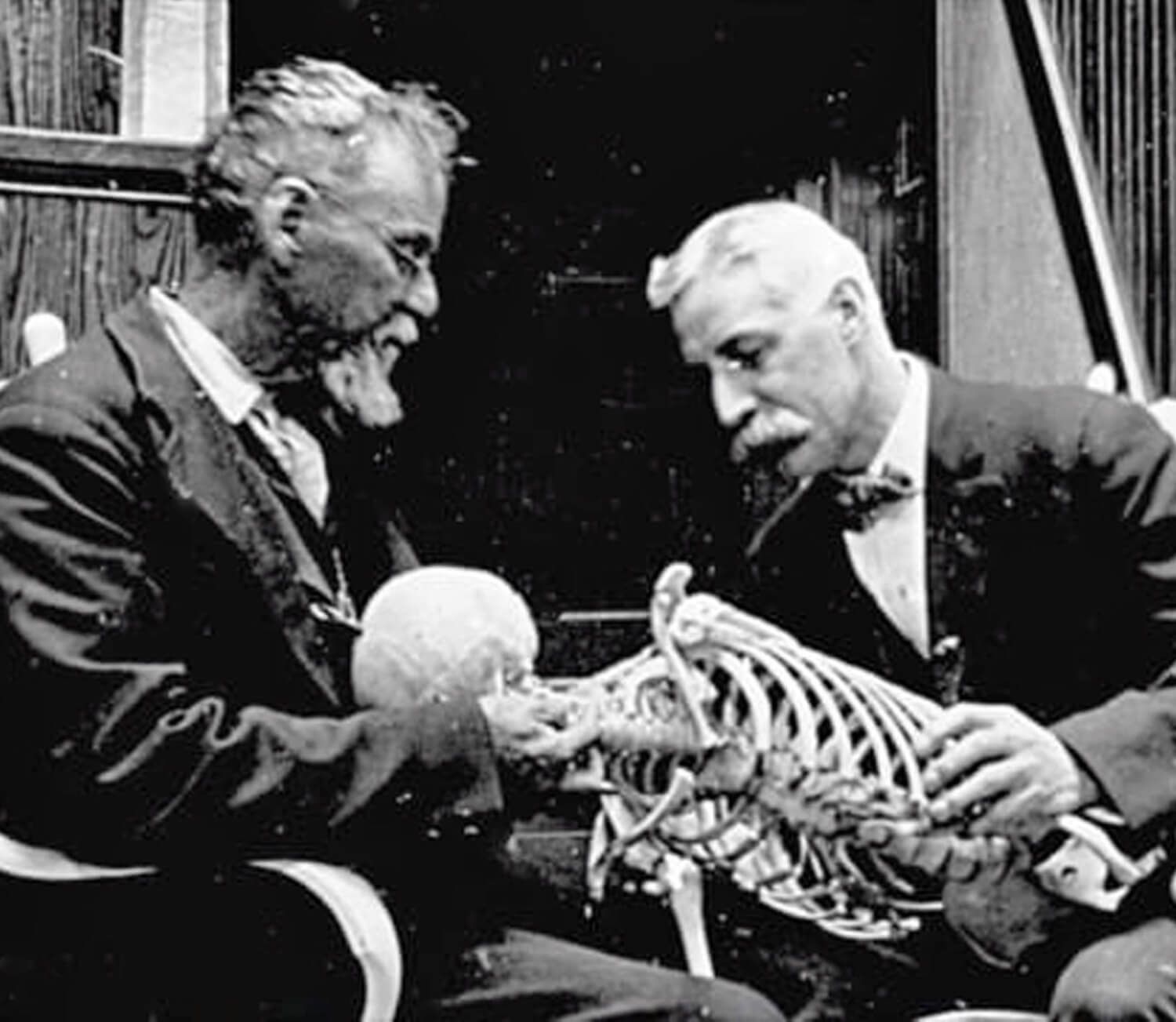 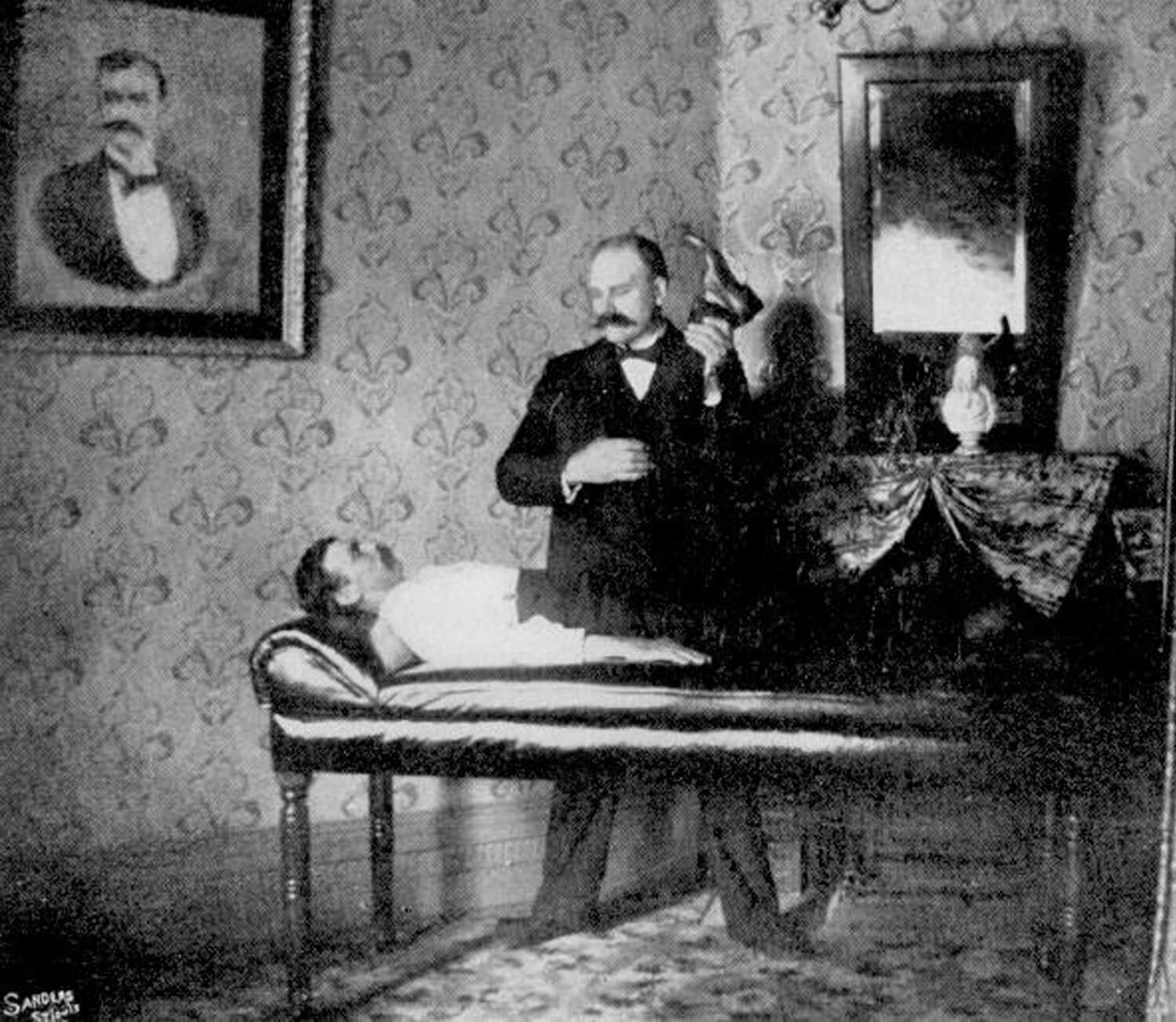 The Founder of Osteopathy

The American doctor Dr. Andrew Taylor Still (1828 - 1917) developed a new understanding of health and illness in the second half of the 19th century, viewing people as a unity of body, mind and soul.

After intensive anatomical studies, he was convinced that humans, as part of creation, carry all possibilities of recovery within themselves. The prerequisite for this was good mobility and dynamism in all areas of the body. He saw a prominent role in the supply and disposal of tissue through blood and lymph fluids with intact nerve supply. The aim of his examination and treatment was therefore to use his hands only to detect movement restrictions in the tissue, to eliminate these and then to allow the body to heal itself with improved internal mobility.

A corresponding sentence from Dr. Quoting for this is still: "Find it, fix it, leave it". He introduced this new approach to the treatment of people as a new form of medicine (osteopathy) to the public in 1874 and founded the American School of Osteopathy (now the Kirksville College of Osteopathic Medicine) in Kirksville, Missouri, USA in 1892.

His osteopathy was very popular. In the first half of the 20th century, it was legally recognized in more and more states. New colleges sprang up and trained more and more students to become osteopaths. At the same time there were massive efforts by the medical associations to limit osteopathy. This dispute was only resolved in the 1960s. Since then, osteopathy has been recognized as generally accepted in the USA, and the study of osteopathy is a full academic education.

There are currently more than 20 state-recognized osteopathic universities in the United States. Today about 54,000 osteopaths practice their own profession in the USA. They hold the title D.O., Doctors of Osteopathy, and are equivalent to medical doctors (MD). This is why osteopaths in the USA prescribe medication, injections and operate. Osteopaths and doctors work together in American hospitals.

In Europe osteopathy developed differently. A student of Dr. Stills, the Englishman Dr. John Martin Littlejohn, brought osteopathy to the old continent. Here osteopathy developed further as a purely manual form of medicine. In London, Dr. Littlejohn founded the British School of Osteopathy, which still exists today. There are currently three universities of applied sciences in England to study osteopathy. The osteopath has been a legally recognized health profession there since 1993. In Belgium and France, osteopathy is one of the generally recognized forms of medicine. Osteopathy is practiced in almost all European countries.

Other osteopaths continued to develop the concept of osteopathy, mainly dealing with the musculoskeletal system, i.e. bones, joints, muscles and tendons, against the believe that only free mobility of these can guarantee a free supply of tissues. A student of Dr. Still, Dr. William Garner Sutherland (1873-1954) studied the anatomy of the skull, especially the sutures and their shape, for many years. In 1939 he presented the phenomenon after the primary respiratory movement. This is a very fine, independently pulsating movement. It can be felt on the skull, on the coccyx but also on other structures of the body and is not related to heartbeat or breathing.

From then on, the primary respiratory movement was an important instrument for diagnosis and therapy for osteopaths. Sutherland expanded osteopathy to include osteopathy in the cranial area. Osteopathy received an additional addition in the 1980s. The French osteopaths Jean-Pierre Barral and Jacques Weischenck deal extensively with the internal organs and how these can be examined and treated osteopathically and expanded osteopathy with the so-called visceral area.

In Germany, training takes place mainly in private schools. There are now more than 20 schools that teach osteopathy at around 70 different locations, mostly as part-time training.